A new report suggests that a legendary great white shark that terrorized South Africans 35 years ago, nicknamed “The Submarine,” may have actually existed, leading some to assert that a Megalodon may still prowl the waters of the southern Atlantic. 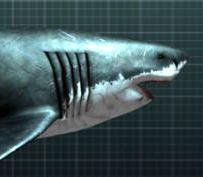 “The Submarine” was reported in False Bay, South Africa, an area that is still famous for its great white population. According to Discovery News, the sightings took place between 30 to 44 years ago, with fishermen describing the monstrous shark as somewhere between 22 and 30 feet in length. A great white reaching that size would have been one of the largest ever recorded, as the sharks are not known to grow to sizes over 20 feet in length.

Alison Towner of the Dyer Island Conservation Trust told Discovery News, “During the 1970s to the early 1990s, various anglers fished from small vessels and reported sightings of huge white sharks in False Bay,” before cautioning that it is often extremely difficult to correctly estimate the size of a great white in the water, “especially when fighting it on rod and reel as was the case in many accounts of The Submarine.”

“If one is standing on a boat,” Towner pointed out, “particularly a smaller boat almost on level with the water, the shark can appear to be much bigger than, for example, (if the person is) standing on a larger elevated vessel.”

Rumors of unusually large great whites are nothing new, and have persisted for years. In 1945, a great white was caught off Cojimar, Cuba, that was reported as 21-feet-3-inches long. Though it was never accurately measured by scientists, a tooth said to have come from the shark could possibly have belonged to a 21 foot great white.

Another great white of near-mythic proportions was reportedly caught in South Australia, said to be 22 feet long. Only the head and fin of that shark were saved, making any true measure of its length impossible.

While John McCosker, chair of Aquatic Biology at the California Academy of Sciences, posits that great whites larger than 20 feet would have “great difficulty capturing live prey and would have to survive by eating large mammal carcasses,” fossil evidence has shown that an extremely large relative of the white shark, Carcharocles Megalodon, existed in the distant past, as The Huffington Post notes.

Recently, tracking data from a 9-foot-long great white showing that the animal was eaten by a larger predator led to speculation that the Megalodon, which went extinct 1.5 million years ago, might still exist in some remote areas of the ocean, as The Inquisitr previously reported.

© 2014 all rights reserved
Posted by Jerome