2 Mountain Size Asteroid On Path With Earth Russian Scientist 7:21 AM

A Russian astrophysicist says his team has located a huge, mountain-sized asteroid whose orbit crosses the Earth's every three years. 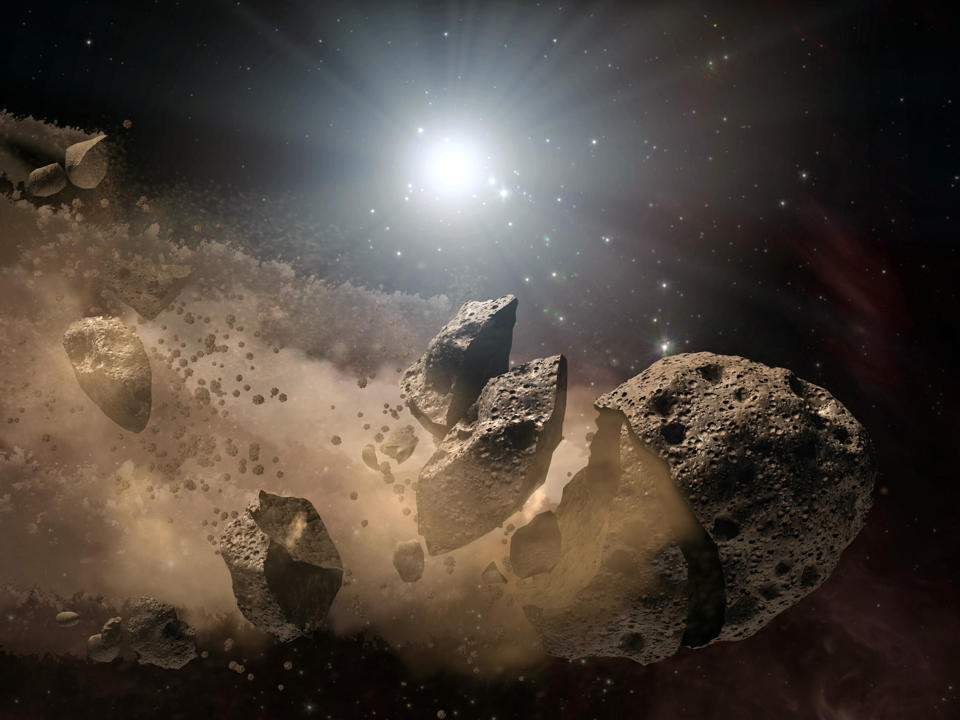 Even though experts say the giant object, known as 2014 UR116, poses no immediate threat of collision, its unexpected discovery underscores how little is still known about asteroids and their unpredictable orbits.

Vladimir Lipunov, a professor at Moscow State University, announced the find in a short documentary, "Asteroid Attack," posted on the website of the Russian Space Agency on Sunday. Mr. Lipunov says the asteroid, which he calculates is 370 meters in diameter, could hit the Earth with an explosion 1,000 times greater than the surprise 2013 impact of a bus-sized meteor in Russia. That object entered Earth’s atmosphere over the city of Chelyabinsk, resulting in a series of ferocious blasts that blew out windows and damaged buildings for miles around.

In the film, Lipunov says it's difficult to calculate the orbit of big objects like 2014 UR116 because, as they hurtle through the solar system, their trajectories are constantly being altered by the gravitational pull of nearby planets. "We need to permanently track this asteroid, because even a small mistake in calculations could have serious consequences," he said.

There is little indication that this particular asteroid could hit the Earth in the next few decades, though over a much longer period a collision looks quite likely, says Natan Esmant, an expert with the official Space Research Institute in Moscow. A more serious issue, he says, is the estimated 100,000 near-Earth objects, such as asteroids and comets, which can cross our planet's orbit and are large enough to be dangerous. Only about 11,000 have so far been tracked and cataloged.

"Every couple of days new ones are being discovered," he says. "Scientists have increasingly powerful tools to do this work, but there's a lot still to be done. Every object that crosses the Earth's path can be a potential threat."

Since the Chelyabinsk meteor, which came as a complete surprise to experts, scientists have been warning about the danger and trying to pool their data in order to get a clearer picture of the swarms of debris that are lurking in space. Scientists use conventional telescopes, radar and infrared detectors to hunt asteroids. The first satellite specifically designed to identify asteroids was launched last year.

A movement of scientists, astronauts, musicians, and businesspeople have launched a campaign to dramatize the danger and seek ways of protecting Earth from what seems like an inevitable destructive collision. They declared June 30, 2015, the world's first Asteroid Day.

Other Articles Of Interest:

Mountain Size Asteroid On Path With Earth Russian Scientist
Spinosaurus: The New Evidence.
European Parliament Vote To Break Up Google
Guy Jumps On Dead Whale
Can Eating These Seven Fish Harm You
Bird Rolls Off Car Only In Chicago
Ionic Wind Thruster The New Jet Engine
Dental Scrap Processing What You Need To Know When You Are Dealing With Gold
Easier Airport Security
Another Jurassic Park Builder Series on Youtube
Liberian Hospital Overwhelmed
Inside UFO Base
Half Life 2 Part 3 Airboat Ramming has been released
Rare Sea Creature In The Gulf Of Mexico

Other Videos Of Interest: