The rapid influx of pioneers continued, and by 1870, it was clear that a townsite had to be selected. On Oct. 20, 1870, a meeting was held to select such a site in the home of John Moore. 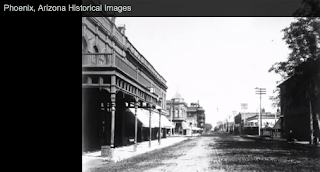 This well-known farmer offered 40 acres to the cause, but 320 were purchased by a popular subscription that raised $50. The official designation of this new townsite was the North Half of Section 8, Township 1 North, Range 3 East. Today, it would encompass the downtown business section, bounded on the north by Van Buren Street, on the south by Jackson Street, on the east by Seventh Street and on the west by Seventh Avenue.

To administer this new townsite, the Salt River Valley Town Association was formed with its articles carrying the following signatures:

John T. Alsap, James Murphy and J. P. Perry were selected by majority vote to be the townsite commissioners. Alsap acted as chairman and Capt. William A. Hancock was secretary.

Capt. Hancock was also a surveyor, and he made the first survey of the townsite and laid out the lots and the town. This first town of Phoenix was one mile long, a half-mile wide and contained 96 blocks. Washington Street was the main street and, on the early maps, showed to be 100 feet wide.

The east and west streets were named after our presidents. Washington Street was placed in the middle and Adams, who was the second president, was given the first street to the north. Our third president, Jefferson, had the first street south of Washington named after him. And the pattern followed - one to the north and one to the south - until recent years.

The north-south streets originally carried Indian names, but these were changed in favor of the more easily remembered numbers - with streets being to the east of Central Avenue and avenues to the west.


Source: Phoenix City Government
This Article is About Selecting a Townsite Washington Street in the 1870s - Phoenix | SEO | Services


About Vu Phoenix: Is an publishing platform design to share information for this area of the country. Vu Studios is A Content Production Company That Specializes In: